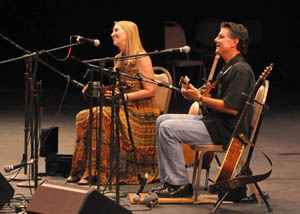 Traveler's Dream creates music that is rich in tradition but driven by innovation and creativity. With powerful voices, rich harmonies and a wide variety of traditional and modern instruments, Traveler's Dream captivates listeners with spirited songs from the Celtic lands and French Canada, hard-driving Irish jigs and reels, sea shanties, and traditional American songs. Nestled alongside this vibrant canon of music are original songs that are often inspired by the beauty of the Midwestern landscape and the relationships people have with the land and with each other. Themes of tolerance, justice, and the value of life's simple pleasures are also frequently woven into their original songs. The band's broad appeal owes much to the band's impressive skills as multi-instrumentalists and the beauty of their close vocal harmonies. They have been praised for the "exceptional way they blend artistry, skill and performance with a great openness and rapport with the audience."
Traveler's Dream  performs as a duo and as a quartet.
Duo: Michael Lewis and Denise Wilson

Traveler's Dream performs as a duo, trio and quartet.  The group is anchored by founding members Michael Lewis and Denise Wilson.  They are often joined by the talented (and very fun!) Chance Heasty (fiddle) and Taylor Stirm (uilleann pipes and low whistle).